U11 &U13 Hockey Girls Qualify to Represent Berkshire at the South Regional Finals!

On Tuesday 26th Feb our U11 girls went to Reading Hockey Club to play in the qualify round of the Berkshire In2hockey championships.

The girls did exceptionally well winning all three of their games in the first round of the competition against The Abbey, St Pirans B, Marist  and Hawkedon. They qualified top of their group and went onto play Lambrook (2-0) and LVS (3-0). The girls were on fire and were playing some fantastic hockey. However, the real test was yet to come! In the semi-finals the girls met The Abbey School for the second time. The Abbey put up an amazing fight and the game was end to end, it ended 0-0 and had to be decided on penalties.  Each goal keeper faced 3 players trying to put the ball past them, it was an extremely tense time. Both teams keepers saved a goal and as a result it went to sudden death. Our goal Keeper Elissa, made an amazing save to put the girls through to the final. The girls faced a very well drilled St Pirans in the Final and again the game was end to end with neither schools scoring. At full time the girls knew what would be coming next and were fully prepared. Elissa, buzzing from  her previous performance in the penalty decider, stepped up to face the opponent and made the goal winning save to put the girls through as Berkshire U11 IN2hockey Champions. The girls go on to represent Berkshire at the south round on Thursday 21st March. We wish them all the best of luck. 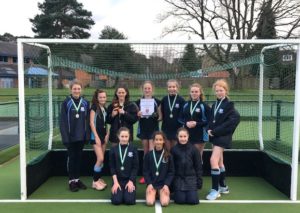 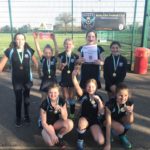 Following on from the U11 success the U13 girls had alot to live up to and they did just that!

Their In2hockey round was held at St Mary’s on Thursday 28th February.

The girls played 3 games in their first round of the tournament against Charters (8-0), Claires Court (8-0) and Cheam (1-0), winning all three game and putting them top of their group. They then progressed through to the Cup competition where they faced Lambrook (4-0), LVS (3-0) and Highdown (2-0). The three wins automatically progressed then on to play in the Semi-finals where they met St Mary’s. This was an extremely high scoring game with both sides scoring end to end. It came down to the last few seconds when Holme Grange slotted the winning goal to take them through to the final. The girls found out that they were to play Cheam again in the final and after a very close game in the first round they knew this was going to be a tough game! After a strong start Holme Grange went one nil up after a fantastic team goal. Lambrook came back at us to score the second goal of the game taking it to 1-1. It stayed this score until the last minute of the game when Lambrook score in open play to take the game to 2-1. Despite Maddison hitting the post there was not enough time to get the goal back. Nonetheless, they did amazingly well to make the final and to come runners up in the whole of Berkshire.