The Team of: Reuben, Harry, Will, Oliver, Hector, Charlie, Monty, Thom and Morgan all did very well, finally coming second out of sixteen schools!

In the Group stages we played 3 matches as follows:

Won 5-0 v Bishop Challoner with 3 goals from Thom, one from Hector and one from Monty. They were up and running.

We then played against Thorpe Hall, winning 1-0, scored by Monty.

Our final game was against Meoncross which we won 1-0 scored by Thom. We were now through to the next cup round.

Here we won 3-0 v Cundall, with two scored by Morgan and one by Monty.

The boys had now earned their place, as winners of their cup matches on points, in the final. This was against Langley Prep, who were a very skilful and able hockey team, from Norwich.

The boys linked well, putting moves together, unfortunately Langley scored first, 0-1. With the matches only lasting 10 minutes they had to raise their game even more and meet the challenge laid down. In the next minute we scored in a great move initiated by their captain Monty and ably finished off by Morgan. It was 1-1… and the final whistle blew.

It was now time for penalty shuffles.

We scored some goals as did Langley making the score 3-3… until they managed to slot a final goal making it 4-3.

The final game couldn’t have been closer and although the boys did not come away as outright winners, they came very very close with silver medals

All in all it was another great day for these talented Year 8 boys. They performed and behaved superbly both on and off the pitch and were a credit to themselves and the school. 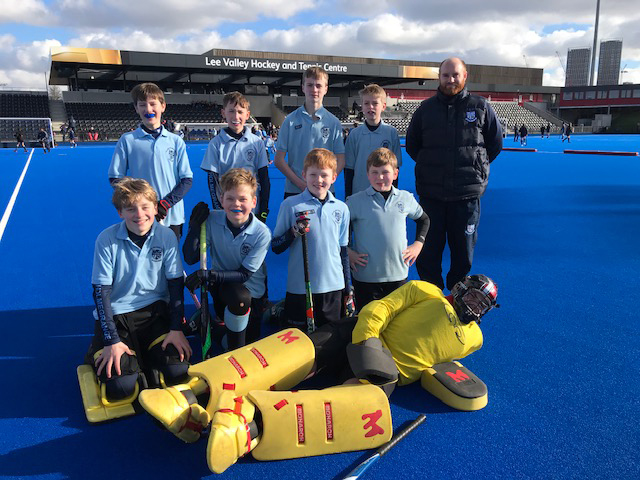